Cordillera Escalera / News / What a wedding without rings, what a jungle without snakes…

What a wedding without rings, what a jungle without snakes…

(Autumn in South America is wedding time… for snakes)

April-May in the Amazon is not only the end of the autumn rainy season, but also the mating time for tropical snakes, including giant anacondas. So a rather large snake has recently crawled to the territory of «Cordillera Escalera» Ecolodge. It’s time to remember which reptiles live in the Peruvian jungle, which of them can be dangerous for humans, and what precautions are recommended to be taken. 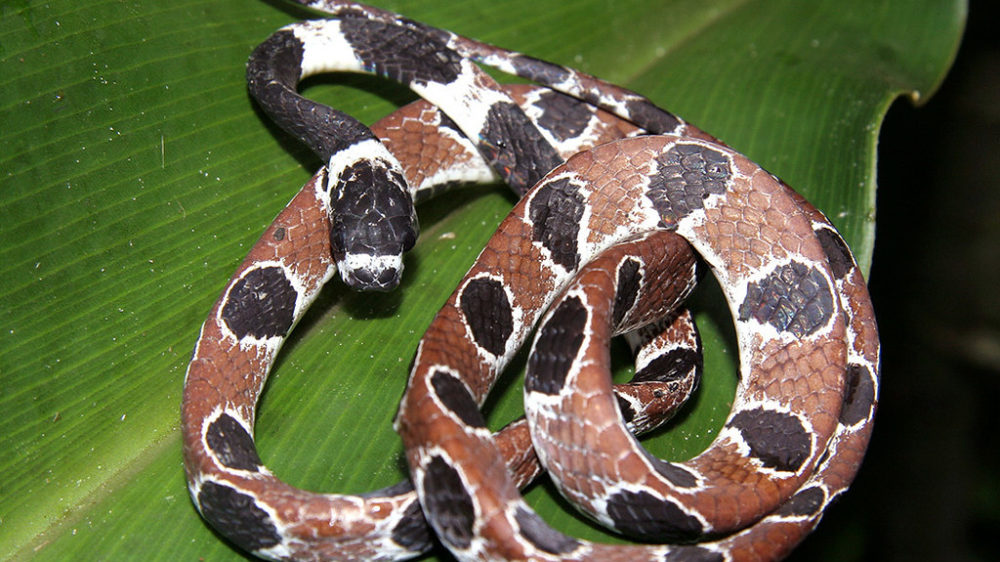 Not so long ago, a small brown snake, painted with large white rings, crawled to the door of one of the bungalows where the guests of our Ecolodge rested. They saw her through the mosquito net, which is used to cover the front door, and immediately called the guard Lauro. With his inherent calmness, our night specialist finished smoking a cigarette with natural mapacho tobacco (its smoke scare away evil spirits), thought a little and picked up the snake.

After he took the uninvited visitor away into the jungle, he was bombarded with questions: – How often can you find snakes here? And was it a poisonous snake or not, and what is it called?.. In fact, although the jungle is a home for snakes, they are rare guests in our Ecolodge: we regularly mow the grass on our territory where reptiles can hide, and carry out fumigation (disinfection). Moreover, snakes usually do not like places inhabited by humans. The exception is the territories where mice are found, serving as food for reptiles. That is why we kindly ask all our guests not to eat in the bungalows, and even more so not to leave unsealed food products. They attract ants, which mice and frogs begin to hunt, and they in turn are the favorite food for snakes. 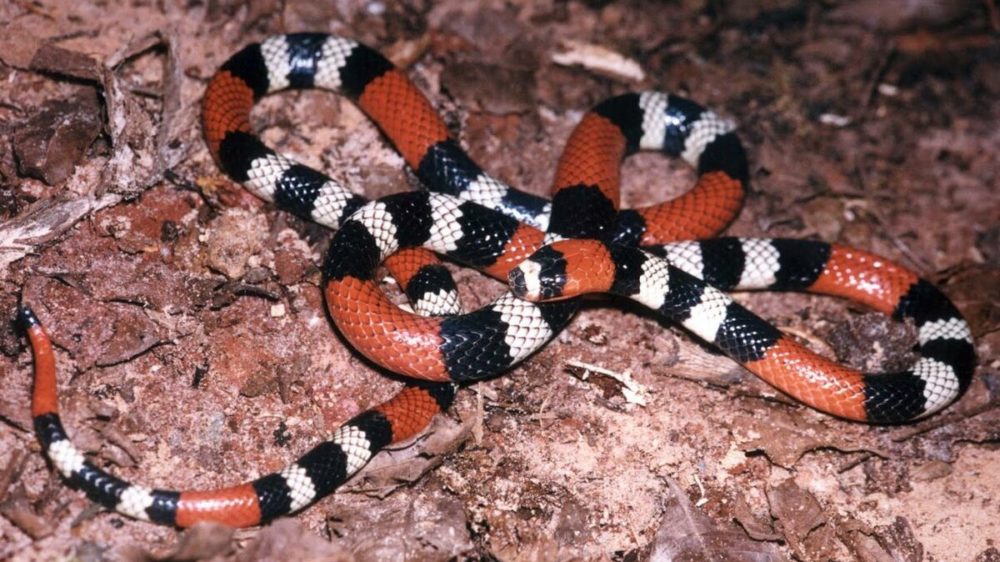 So what was the name of the visitor who surprised our guests? It was a non-venomous snake – a Catesby’s snail-eater (Lat. Dipsas Catesbyi) from the family of Colubridae. This is a harmless representative of the Amazonian jungle, the main food of which is tree snails – in their search the snail-eater can get into foreign territory. Interestingly, because of its bright color, this reptile is often confused with the most poisonous snake in the Amazon – the deadly coral snake (Lat. Micrurus Corallinus), which the locals call Naca Naca. This reptile has a very secret lifestyle, trying to settle away from the territories inhabited by humans, hiding in the ground or in the heaps of leaves. Naca Naca go outside mainly during the rain or the mating season. According to our staff, they were never met on the territory of our Ecolodge. 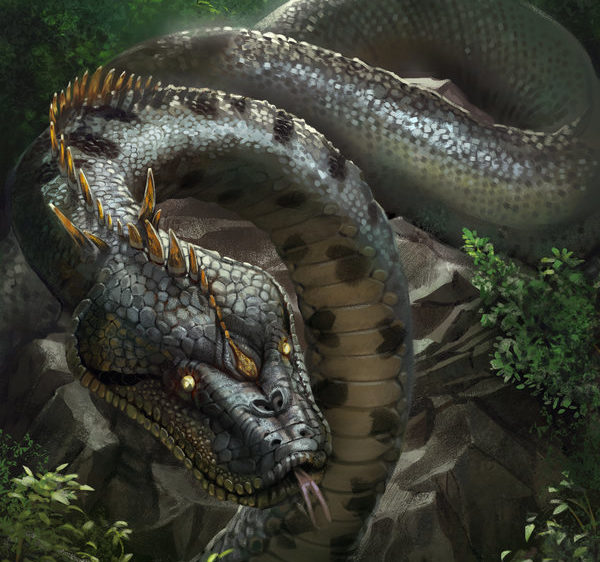 In general, many legends and superstitions are devoted to Amazonian snakes. So, one of the main magical creatures in the folklore of the Peruvian Indians is Yacumama, which means in Quechua «Mother of Water». It is believed that every river or lake has such a «Mother» and without her the reservoir will inevitably dry up. According to one of the legends, such a huge snake lived in Lake Tuytuycocha near the Lamas settlement, which protected it from poachers. But one day people decided to expel her and began to throw stones and sticks at the lake, trying to get to Yacumama. In response, she crawled out of the lake, dragging along its waters and causing a flood. After that, she went to the selva, and the water never appeared in this place again.

Also, the story of the famous Spanish conquistador and chronicler named Pedro Cieza De Leon (1518-1554) from his work «Crónicas del Perú» («Chronicles of Peru») got very popular. During the reign of the Inca Yupanqui, a detachment of warriors went on reconnaissance to the upper part of the Amazon, where they were attacked by huge snakes, which ate most of them. After that, the Inca turned to a witch with a request to defeat these snakes. The sorceress enchanted them, so that the next squad found that all the huge snakes had become sedentary and sleepy and were no more dangerous.

Also, here one cannot fail to mention the largest representative of the Amazonian poisonous snakes – the Southern American bushmaster (Lat. Lachesis Muta), which belongs to the Viper family. Locals call this reptile Shushupe – this word alone makes them turn around and causes fear. And not in vain. She can reach a length of 4 m, and her poisonous teeth are 2.5 cm. These snakes are very aggressive and never forgive those who enter their territory. It is known from the stories of local lumberjacks that Shushupe can chase an intruder until he bites him. And these reptiles crawl very quickly and, when attacked, try to bite 3-4 times in order to inject as much poison as possible. Fortunately, in our region of Tarapoto, there have been no cases of meeting with these dangerous representatives of the Amazonian jungle for a long time. 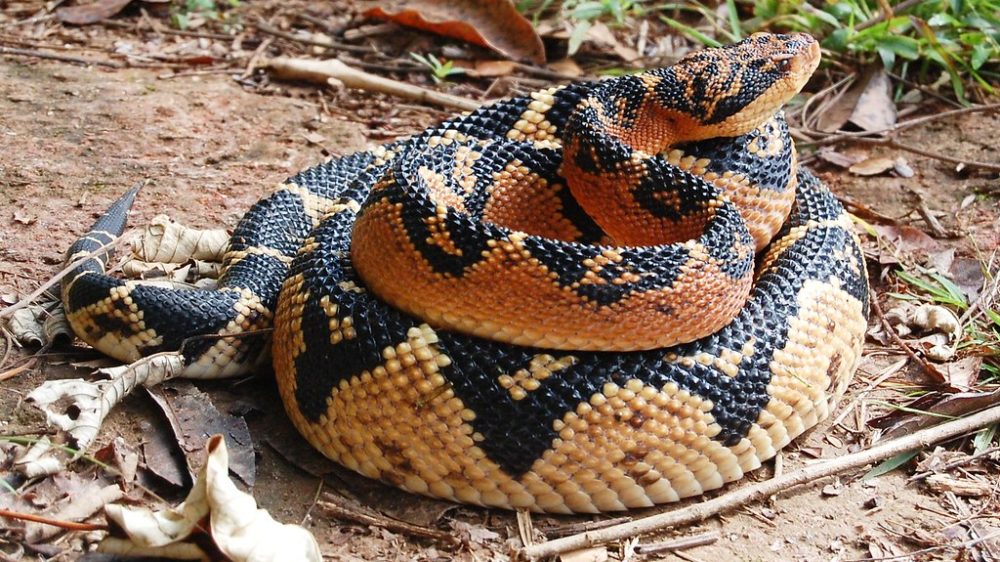 However, it should be remembered that our Ecolodge is located in the middle of the Amazonian forest. We do our best to make the guests’ stay comfortable. In the folder with living conditions, you can find information on how to act when meeting a snake and how to avoid attracting reptiles to your bungalow. Our local staff know how to deal with a variety of local fauna and have many interesting stories to tell.

For example, the legendary inhabitants of the Amazon – anacondas (Lat. Eunectes Murinus) are not poisonous, but they can bite painfully. Most of their lives they keep alone, but during the mating season (April-May) they gather in groups. Above-mentioned Pedro Cieza de Leon in his chronicles describes how the Spaniards stumbled upon a huge fat snake (apparently an anaconda) more than 6 m long in the jungle. When the conquistadors killed it, they found a whole fawn in its belly, which they fried and ate. 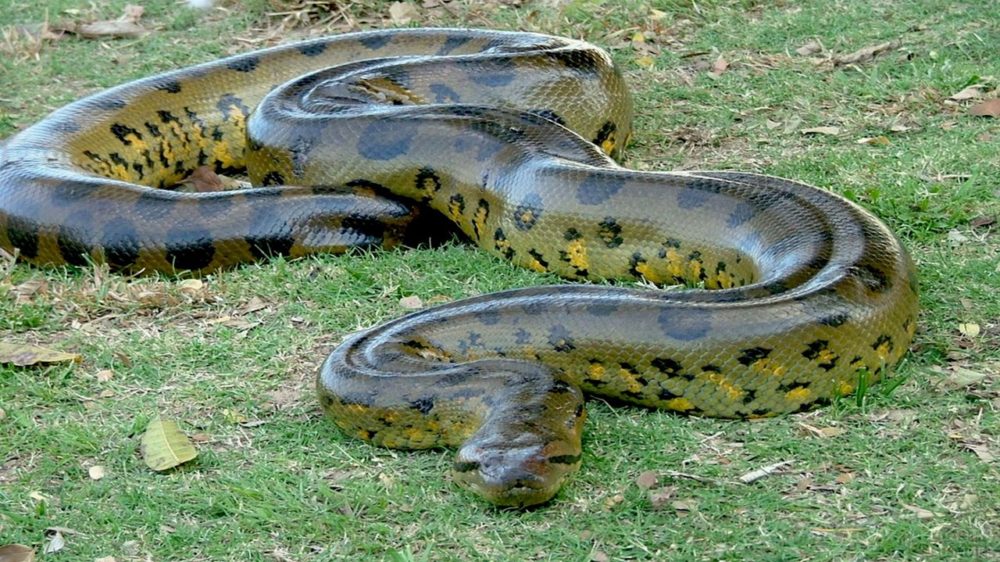 Important! Going to the Peruvian jungle, be sure to take a repellent with you and use it throughout the trip. In Peru, there are insects, the bites of which are not dangerous to humans, but they are unpleasant and take a long time to pass. Never touch unfamiliar animals and insects, many snakes and frogs are deadly poisonous. In case of a bite, it is necessary to remember the appearance of the animal and immediately contact the hospital or the nearest doctor.

Recently, the Peruvian National System of Natural State Protected Areas reported that a new species of marsupial frog belonging to the genus Gastrotheca was discovered in the jungle of the Amazon. This reptile was first recorded in the «Cordillera de Colan» National Reserve in the north of the country, near the border with Ecuador. Let us recall in this regard that our Ecolodge is named after the «Cordillera Escalera» Protected Area, formed more than 15 years ago (read more here). The location of our eco-hotel on the border of this area allows guests to explore the diversity of tropical flora and fauna, taking advantage of all the benefits of civilization and the delights of comfortable accommodation. 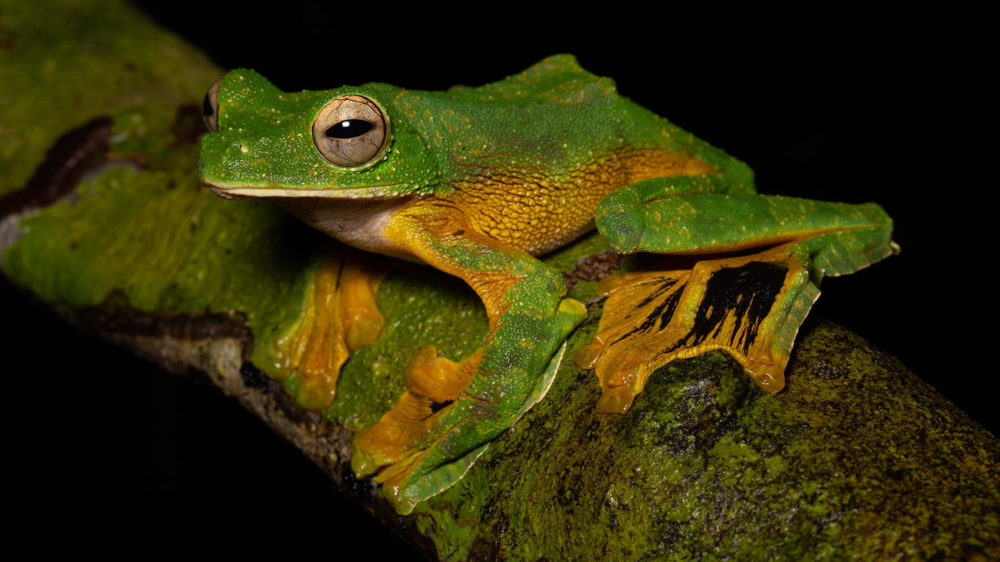 And there is very much to study: the fauna of Peru has more than 1,850 species of birds (of which 130 are endemic), more than 1,100 species of butterflies, more than 250 species of mammals (cougars, jaguars, Andean bears, antelopes, sloths, tapirs, armadillos, monkeys, llamas, alpacas and guanacos) and of course many species of reptiles including various snakes, frogs and alligators. Our Ecolodge is located in the jungle area, where a rich tropical fauna is represented: peccaries, tapirs, antelopes, cougars, sloths, armadillos, possums, a huge number of monkeys and birds (toucans, parrots, hummingbirds). Welcome to the Amazonian selva!