Rare palm trees are planted in the ecolodge Cordillera Escalera

Staff of the ecololodge Cordillera Escalera has planted Tarapotus palms, also known as “potbellied palms”. The largest city of the San Martin Province – Tarapoto, owes its name to these trees, as well as its unofficial nickname – “the City of Palms”. The surrounding jungle is also home to many other interesting trees and shrubs, which guests of our ecolodge can explore in details. However, first things first.

“Pot-bellied Tarapotus palms” exist!
The city of Tarapoto was founded in 1782 by the Spanish bishop with the complicated name Baltazar Martínez Jiménez de Compagnon on the lands of the ancient indigenous peoples Pocras and Chancas. They differed in language and customs from the Quechua tribe, were at enmity with the Inca empire, and therefore fled from them to the Amazon selva. Lamas became the main Indian city of what is now the Province of San Martin, near which a satellite settlement arose in the valleys of the Cumbasa and Shilcayo rivers. It gave rise to the modern Tarapoto. In ancient times, on this place there was the Suchiche lagoon (drained later by Spanish colonists), along the banks of which Tarapotus palms grew in abundance. The natives used them extensively to make bows and arrows, spears, canoes and in the building of houses. 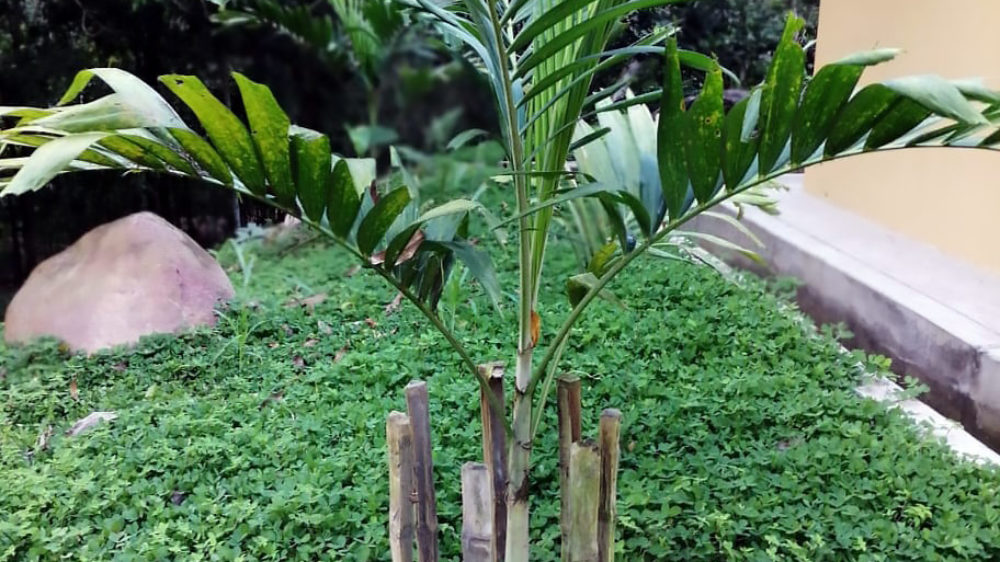 According to one of the legends, the first Spanish conquistadors who arrived in this region stopped on the banks of the Suchiche, taking advantage of the hospitality of the local tribes. From the latter, the Spaniards learned the name of this unusual palm tree, strange for Europeans – Tarapotus. Nowadays, it is known under other names (Lat. Icartea Ventricosa Martins or Huacrapona Barriguda). Now on the site of the once beautiful lagoon, a cozy city park has been laid out, but, unfortunately, the palm trees are almost gone.

With great difficulty, but we found and planted several Tarapotus seedlings in our ecolodge Cordillera Escalera. Now all our guests have the opportunity to admire this mysterious plant. When you look at an adult palm tree, it`s clear where the funny nickname came from – the pot-bellied palm tree. In the upper part of the trunk (up to 25 m in height and 35 cm in diameter) there is a slight thickening that really resembles a belly. It seems that the plant have swallowed the watermelon, and it got stuck in the middle of the trunk))).

Why is it dangerous for men to eat Aguahe?
Not only pot-bellied palms are known around Tarapoto. On the territory of our ecolodge, there are other types of palm trees, some of which are a kind of legends of the Amazon. Say, Aguaje (Lat. Mauritia flexuosa L.), also known as Buriti or Morichi. Their fruits are renowned for nutritional and healing properties due to their high content of vitamins A and C. This fruit is so popular among the local population that in the city of Pucallpa they even built a central cathedral in the shape of an Aguaje fruit. But it is mostly eaten by women. Why? Aguaje fruit contains many female hormones – phytoestrogens, and if a man eats it, then it will enhance the curve of his body, like as at Eve’s daughters)). 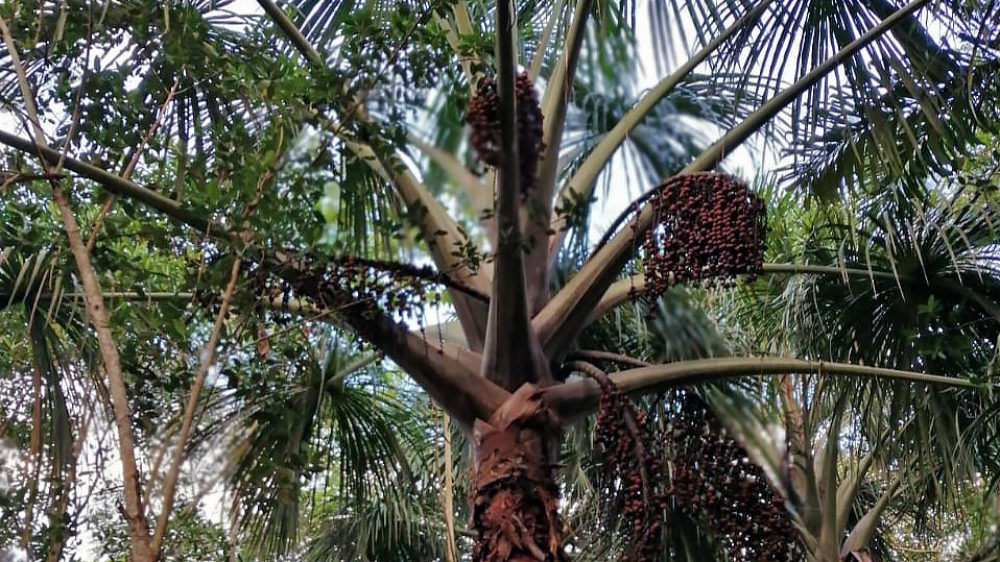 Another striking representative of the botanical family Arecaceae, as they call the family of palm trees, is the Cashapona (Lat. Socratea exorrhiza), popularly known as Pona. The roots of this palm tree resemble tubular stilts in shape: one tree can have up to 30 such roots, forming a cone in the form of a skirt up to three meters high. They grow fast enough, due to which the plant begins to move – that is why the locals call the Cashapona a walking palm tree. By the way, a male aphrodisiac is made from its roots.))

Shica shica plants (Lat. Aiphanes horrida), of which there are more than twenty specimens in our ecolodge, are a favorite delicacy of Amazonian children and adults. Shica shica is easy to recognize by its round trunk, dotted with thin and long thorns up to 30 cm long. The fruits of this palm are very sweet, and the seeds taste like nuts. Nothing to be surprised that in 2018 at the ExpoAmazonia exhibition, chocolate with Shica shica fruits, made by a manufacturer from the San Martin Province, received the main prize in the category “Best Innovative Product”. In addition, Shica shica seeds, characterized by a regular rounded shape and similar to miniature coconuts, are used to make souvenirs.

Palm is a symbol not only of peace
There are about 2400 species of the Arecaceae family, mainly in countries with tropical and subtropical climate. In Peru alone, there are about 450 species. The word “palm” itself comes from the Latin palma, which means “human palm” (apparently due to the shape of the leaves). In Spanish, a distinction is made between palmera and palma. Palmera is a palm tree, but palmа is mentioned when talking about a palm branch.

In many traditional beliefs and cultures over the world, the palm branch is a symbol of victory, peace and eternal life. This idea originates in the history of the ancient civilizations of the Middle East and the Mediterranean. The palm tree was a sacred plant in ancient Mesopotamia and it was considered a symbol of immortality in ancient Egypt, its branches were awarded to the winners of battles and sports games in ancient Greece and ancient Rome.

In modern monotheistic religions with common roots such as Christianity, Judaism and Islam, the palm branch is also one of the main symbols. For example, in Christianity, it is associated with the Palm Sunday, when the solemn entry of Jesus Christ into Jerusalem is celebrated. As is known from the Gospels, the townspeople greeted Christ with palm branches. Jews also use them in the celebration of Sukkot – in memory of the wanderings of their ancestors in the Sinai desert. Muslims believe that date palms should grow in paradise. Today we can see the image of a palm tree on the coats of arms and coins of many countries of the world.

In the Amazon jungle, palm thickets are one of the most important economic and cultural values for the local population. People use all parts of plants for some purposes. The natives build the roof and walls of houses from palm leaves, weave baskets and fibers from them. The petiole is used to make building parts, mats and arrows for hunting. From the trunks of some types of palm trees, material for walls, floors and doors is made, and starch is also obtained. From palm fruits they produce oil, souvenirs and even dessert. And finally, we should mention that the roots of some types of palm trees are used in traditional medicine recipes.

Ecolodge Cordillera Escalera invites everyone to visit! Here you can have a great rest in middle of Amazon jungle and also learn a lot about the flora of our planet. There are special routes in our Chacruna Nature and Recreation Park, along which our staff accompany the guests of ecolodge. If you come to visit us, make your reservation in advance, as the number of rooms in the ecolodge is limited. Waiting for you!